Meet the Mandarin duck, regularly dubbed the most beautiful bird in the world, and it’s easy to see why.

With its strikingly colorful feathers and unique shape, it really is like no other animal we have ever seen before.

They can still be found in abundance in their native East Asia but can also found in the numbers in the UK.

They were brought over from China in the 20th century by the Mandarins but some of them escaped and created their own feral colony, and this is how their population was cultivated in Britain and other places around the world.

As you may see from the photos, they are multi-colored. With a red bill, white crescent over its eyes, orange face and ‘whiskers’.

The breast is purple with bronze-colored sides. The top of the back is blue with two orange ‘sails’ just below it that stick up, just like a boat sail.

Only the male of the species is this unique coloring. The female is a much duller grey color with a white striped running from her eyes and white spotted breast.

Spotting one of these guys in North America is possible, but extremely rare. You may remember the ‘famous’ Mandarin duck called Trevor from Vancouver who went viral.

These stunning ducks don’t have any natural predators in the west, so when they were first accidentally introduced to the west, there were worries that they may become invasive.

Mandarin ducks live and breed in dense and shrubby areas such as the edge of rivers.

Although they may breed in valleys and high altitudes, they prefer to be lower down, as long as there is fresh water around.

They usually eat plants and seeds but are known to enjoy the odd snail, insect or small fish to their diet, depending on the season.

The Mandarins biggest threat is due to habitat loss from logging. They are not listed as endangered. 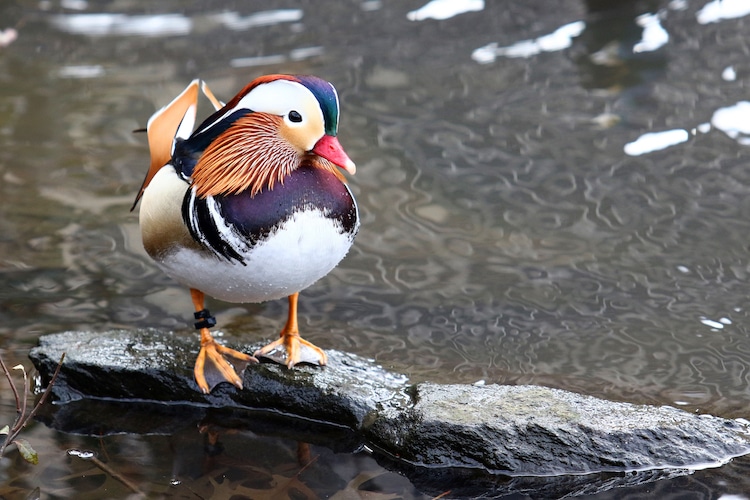